You are here:
Industry AwardsInsuranceMedia 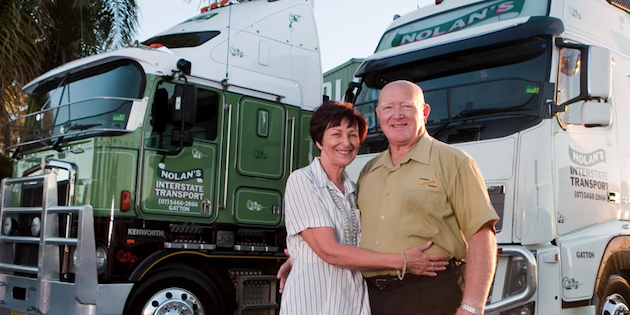 The event – held at Rosehill Racecourse on 14 November – was attended by more than 250 carrier partner representatives and industry professionals.

Nolan’s Interstate Transport is a family-run business which began in 1908. It has grown immensely over the past 100 years and now operates 173 trucks and 263 trailers. Making sure the customer is happy is imperative to their business. The company’s quality of service, excellent safety record and communication with our distribution centres has contributed to the accolade.

South West Express is another strong family business which began in 1993 as a mother and father operation. The company has developed a great working relationship with Woolworths’ Perth Regional Distribution Centre (PRDC) and puts safety first. It’s outstanding service and ability to understand the needs of our customers makes South West Express deserving of this award.

“Nolan’s and South West Express can be incredibly proud of all they have achieved in 2019,” said Woolworths General Manager Transport and International Supply Chain, Chris Brooks.

“Like Woolworths, both of these carriers have an unwavering commitment to safety in road transport,” he said.

“They have also delivered exceptional service to customers throughout the year – delivering goods across our network on time and with great care.

“We’re grateful for their positive contribution to our transport network and wish to congratulate them on their achievements.”
With a fleet of 1,600 transport assets and more than 7,000 truck movements every day, Woolworths operates one of Australia’s largest supply chains. Woolworths takes its Chain of Responsibility obligations seriously and works hard to foster a safety first culture across its transport network.